Catholic Clergy in the Lune Valley

Fr Luiz has brought a calming stability of Catholic traditionalism to our churches, creating a lively liturgy with his special brand of energy, charisma and passion. He has a unique gift for enthusing the young , and as a brilliant Scripture scholar and a man of prayer and Marian devotion, he is an inspirational preacher.

When he’s not occupied with our parishes, he’s looking after education in the Diocese of Lancaster.

Paul is currently employed by the Ministry of Justice as RC Prison Chaplain at a highly rated Cat D prison (HMP Thorn Cross) based in Cheshire and works half time there.

Until its closure due to Govt public sector cuts, and return to the Duchy of Lancaster, Paul was the last RC Chaplain at HMP Lancaster Castle. He worked there together with his wife Wanda and two other colleagues and did similar work to that currently being performed, but then in Cat C closed conditions.

He has also worked as News and Programme Producer at Lakeland Radio which is based in Kendal and serves the South Lake District area, and in 2008 Paul devised, styled and set up the “not for profit” community radio station INDIGO 106.6fm creating its format, branding and delivery from project level to its trusted community status.

Paul has previously worked as a Senior Law Lecturer for 10 years at Manchester Met University, a Home Office Researcher on the West Yorkshire Burglary Reduction Programme.

He has recently published two books on Amazon and Kindle; the first “Reflections on the Stations of the Cross, in the footsteps of St Paul” and most recently a self-review book for prisoners and others in addiction or confinement titled, “Rattle that lock, break those chains”. This again is based on reflections on passages from St Paul.

Paul has a busy personal life which includes an active interest in cycling, swimming, hill walking and for his past sins, supporting Bolton Wanderers. The priority in his life has been and always is his family. He has a wonderful wife, friend and counsellor Wanda. Together they have four brilliant children, Emma, Laura, Andrew and Philip, joined now by seven grandchildren. 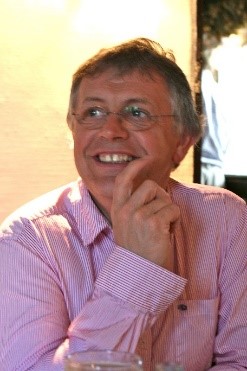